Consider a simple constraint example a == b + c;

Now if you constraint any of the 2 values of a,b,c the third value gets generated automatically due to the bi-directional nature of the constraint.

Value of a gets generated first based on which b and c are generated. Generating a based on b and c is not possible. The same functionality can be achieved by using a solve before constraint as follows.

Functions can be used in constraints for reusability between constraints, but important point to note is the constraints will become uni-directional when used in a function.

What are the application areas of floating point numbers ?


How to use vmm_consensus to determine when the test should end ?

3) Each of the sub environment instance has a single vote, it can consent or oppose.

4) We have options such as consensus_force_thru() which can be used by a particular subenv or a VMM components to force consensus through even though other components oppose the decision.

One of interesting challenges in verification is building constraint random verification environment on top of an existing code which is a procedural code.The challenges are unique to each of the environments; simplest solution is wrapping the procedural code in a transactor which is connected to a channel which interfaces with the constraint random generators. Transaction object attributes are mapped to different functionality in the procedural code.
Posted by Saravanan at 11:49 PM No comments:

Performance issues are very hard to debug, especially to find the root cause of the issue. If the constraint solving time is at unacceptable limits, the first area to debug is the bidirectional nature of the constraint implemented. quickly review the constrains that does not require bi-directional functionality and convert constraints from bidirectional to unidirectional using void termination or solve before, also reduce the number of constraints solved at a single point of time to improve performance.
Posted by Saravanan at 8:32 PM 2 comments:

Structures and union in system verilog !!!

VERA/NTB users migrating to system verilog have a tendency of not using structures and union construct in system verilog when architecting or implementing a system verilog verification environment. The reason being, this constructs are not available in VERA/NTB. Struct is pretty useful construct to group fields which are logically related to each other. It helps to organize you code. The union construct is very similar to a structure, but only one of the fields will be valid at a given point of time. Using packed struct and packed unions helps to organize fields in the memory without gaps, which in turn results in faster access to memory and results in faster simulation time.
Posted by Saravanan at 11:38 PM No comments:

When you want to do a factory replacement of a transaction class in your scenario,we assign the factory to .using.


Many times i have seen people including myself spending time debugging their code when using “.using” for factory replacement as they are not aware of the gotcha.Maybe the RVM/VMM documentation should have this requirement highlighted so that the user can easily understand this requirement.
Posted by Saravanan at 1:50 AM No comments:

RVM/VMM atomic and scenario generator randomizes a blueprint pattern which is assigned with the extended class (factory) , the copy of the randomized blueprint is pushed into the channel. Most of the RVM/VMM users use this approch in there custom generators. Is there a different way of implementing your atomic generator without using a copy() method ?. The answer is yes, following method can be used to generate atomic transaction without using copy(). 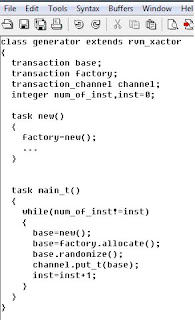 For the above code to work you need to implement the allocate method in your extended class. The extended class is assigned to the factory before the start_xactor() method is called.
Posted by Saravanan at 10:45 PM No comments:


1)Language migration without the help of a commercial language conversion tool
2)Code coverage analysis and identification of code coverage exclusions.
3) “X” tracing while debugging gate level simulation.
4)Release management ( Tagging the release code ,Triggering regression and debug of regression results ,becomes messy when more that 25 people are involved and release management is handled by a single person)
5)Working on outdated technology which is away from the verification market movement.
Posted by Saravanan at 1:41 AM No comments:

1)This is a silicon proven IP no need to do rigorous testing and coverage – Hold on are you sure if all the feature crosses are validated by the IP vendor in the silicon.

4)Start the implementation and study the protocol as you go. We want you to be productive from day1 --- A big no!! You cannot architect an environment without understanding the protocol completely and you will always end up with a situation were you were not informed about a requirement.

It is hard to debug the constraint failures spanning multiple transactions say sequence of ten to fifteen transaction were the constraints on each atomic transaction is dependent on the other. Manual debug on such failures are time consuming.We can use a procedural checker to check the randomization of the scenario which is an array of transaction objects. In RVM/VMM the procedural checker can be placed in the post_scenario_gen callback of the RVM/VMM scenario generator. The post_scenario_gen has drop bit which can be set from the callback to stop the transactions from being pushed in to the channel.The checker is active at all times and flags an error if there is an error in the randomization across transaction.
Posted by Saravanan at 10:12 PM No comments:

Following are some of the new features of system verilog 2009 standard that caught my attention.

The above defines can be used between any section of code to maintain backward compatibility with verilog or system verilog 2005, very useful if you are migrating your testbench or design to system verilog, you might come across system verilog keywords used in your verilog design which can cause compile to fail. With system verilog 2009 just wrap the code with `begin_keyword and `end_keyword to get past the error without modifying your code.

I was looking out for a nice tutorial on the new features of VMM 1.2. I came across this 2 hr video tutorial on VMM 1.2 features on the VMM central web site (http://www.vmmcentral.org ). Nicely composed video covers all aspects of VMM 1.2 release from implicit phasing, analysis ports, transport & factory. Definitely useful for VMM 1.1 users migrating to VMM 1.2.
Posted by Saravanan at 4:11 AM No comments:

RVM/VMM ships with some pretty useful built-in components and applications. RVM/VMM's Atomic Generator is probably one of the most powerful ones, yet it's pretty basic. It can definitely help you generate a flow of random items but it was not intended for generation of sequences. A sequence (scenario) is a set of items that have some sort of correlation between them. For example - consider a set of 6 transactions where the transaction 4 depends on the previous transactions say transaction 2. Atomic generator can not generate this kind of sequence, RVM/VMM addresses the need for smart scenarios with the "RVM/VMM Scenario Generator"